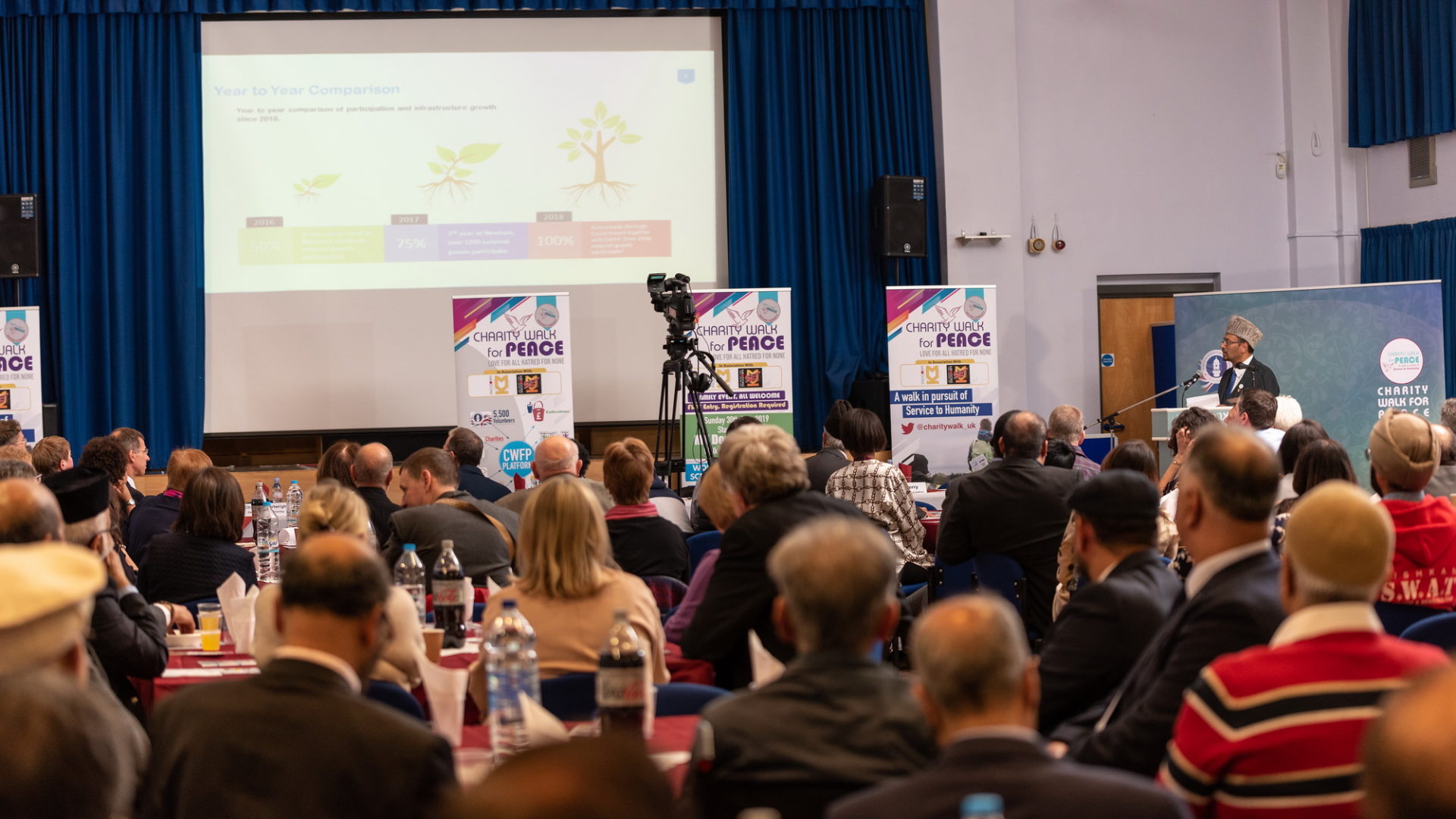 Members from the Ahmadiyya Muslim Elders Association East Region officially launched the 2019 Charity Walk for Peace, in association with MK Dons and MK DONS SET, at their Pre-Charity Reception Dinner held at Newham Sixth Form College in Newham on Saturday March 30th to a packed hall of charities and civic dignitaries.

124 guests, including representation from 37 charities attended the launch together with Mr. Nick Bracken OBE, Deputy Lieutenant for Greater London and Ms. Liz Green, Sheriff of the City of London.

Cllr. Sally Littlejohn, Mayor of Waltham Forest, Cllr. Sanchia Alaisa, Mayor of Barking & Dagenham and Cllr. David Cartwright, Mayor of Bromley graced the evening and were amongst the guest speakers for the Charity Reception.

Fundraising through the charity walk is now in its 34th year and the country wide Charity Receptions focus on the aims, objectives and fundraising efforts of the Charity Walk for Peace and the supported charities.

During the Charity Reception, a total of £6,200 was donated by the Charity Walk for Peace to the following charities:

A number of guest speakers spoke about their involvement with the Charity Walk for Peace and about the Ahmadiyya Muslim Community East Region and their community support initiatives.

Zaheer Ahmad, Chairman of the Charity Walk for Peace, said:
“Thank you from the bottom of my heart to attending today and thank you for your support and for participating this evening, so we may work together for humanity and for peace. Members from the Ahmadiyya Muslim Elders Association have worked so hard to collect hundreds of thousands of pounds for charity and it’s so encouraging to see.”

Tim Todhunter, Head of Fundraising Development, Royal Society for Blind Children, said:
“I’d just like to say what a fantastic event today is. I’ve been involved for the past 9 years and the Charity Walk for Peace has raised nearly £25,000 for the blind children that we work with. It’s a fantastic cause.”

Ruth from The Renewal Programme, said:

“We’re delighted that you are hosting this evenings event in Newham. This is our second year for the Walk for Peace, and we are absolutely thrilled to be part of taking peace and care for our fellow human beings out to everyone in the community and we are so pleased to be working with you.”

Rafi Ahmad, Vice Chairman of the Charity Walk for Peace, said:
“We are having this wonderful reception today to officially launch the walk with MK DONS and MK DONS SET. To date we have supported over 494 charities, and we hope you will use today’s session to become our friends as we can do so much more together with more people involved. I would like to mention here that this year’s National Walk takes place in Milton Keynes, but we have 18 regions and already 10 of those regions have said they are going to hold regional walks this year for charity.”

“I am grateful to the charities who joined the East Region Charity Reception in Newham on Saturday. Without their support we would not be where we are today, raising millions for UK charities. Our spiritual leader, His Holiness Hazrat Mirza Masroor Ahmad, has guided us to work with smaller charities even more so. In the last few years we have supported more and more local charities and the significance to that is the smaller charities benefit much more from the donations and the volunteer support. Thus, moving the National Walk across the country helps us to do this.”