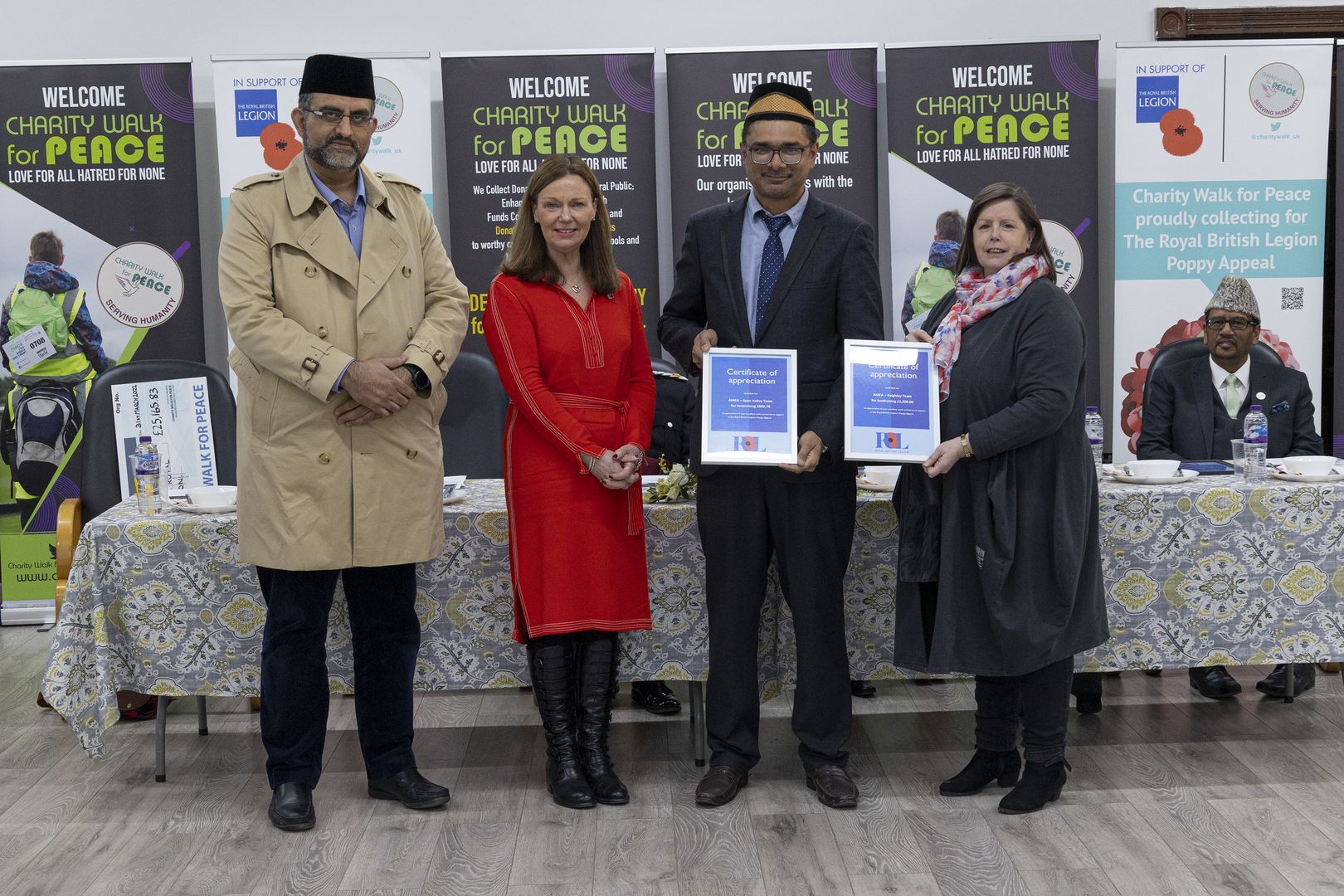 ABOUT THE VOLUNTEERS & AFFILIATES APPRECIATION
EVENING 2022

The region was honoured and delighted to be graced with the presence of the Chairman and Vice chairman CWFP UK, Mr Zaheer Ahmed and Mr Rafi Ahmad who travelled from London the day beforeto attend a similar volunteer appreciation evening in Hartlepool in the North East Region.

The programme started at 6pm with the Recitation of the Holy Quran by Mr Slah Uddin Mir, Regional Missionary followed by a welcomeaddress and a short video presentation by the Vice Chair of the CWFP UK, Mr Rafi Ahmad. He appreciated our volunteers who had done a magnificent job in collecting over £690,000 throughout the UK and underlined how every penny was passed on to the other charities and none was kept for administration.

The region organised two charity walks on 19th September 2021 in Greenhead Park in Huddersfield and Ward Jackson Park in Hartlepool, which ran simultaneously with our national charity walk in London and all other regions throughout the UK. Our region raised £26,589.93 for various CWFP projects and £5,589.93 for local charities. Five local charities were present to receive charity cheques for the money raised.

The Chairman CWFP UK, Regional President CWFP North East, Deputy Lord Lieutenant of West Yorkshire, Deputy Mayor of Kirklees and Senior community fundraising manager from RBL all collectively presented
cheques to the five local charities and the representatives who graciously accepted the cheques. They said a few words and introduced the work of their charities and their ongoing positive relationship with the AMEA.
CWFP cheques were presented to:

RBL Volunteer Appreciation
The region was pleased to announce for the first time all 14 majlis, including the 2 newly formed Majlis in Doncaster and Newcastle were actively involved with the RBL Poppy Appeal Collections from 30 Oct 21 to 14 Nov in 2021. A total allocation of 97 days and 147 volunteers took part in the poppy appeal collections in various stall at the railway stations, shopping malls, open market stalls and supermarkets. we are please to announce that we had a total collection for RBL Poppy appeal of £25,165.83, compared to just over. £15,000 collected the
year before in only 8 locations in the region.

Judith Reay was extremely honoured and pleased to be invited, along with her RBL colleagues to this event and was impressed with the AMEA volunteers hard work in raising such a large amount for the poppy Appeal in our local areas. She was not aware of the enormous charity work the AMEA was involved and was pleased to see the
the positive relationship that has been built wit the RBL colleagues and AMEA volunteers in the regions and sees this going from strength to strength.

Key Addresses
The deputy Mayor of Kirklees, Councillor Mahmood Akhtar was extremely honoured and pleased to be invited today and was pleased to have attended the charity walk at Greenhead Park in Huddersfield and wished the AMEA as well to continue to do their outstanding charity work.

Deputy Lord Lieutenant of West Yorkshire, Mr Jon Hammond DL was delighted to accept and attend today’s event and was very pleased to have attended the charity walk last year at Greenhead Park in Huddersfield as well. He has been impressed with the work the charities and the RBL are doing in partnership with the AMEA and wishes to see this growing and expanding.

Regional President CWFP North East, Mr Lutf Rehman gave a vote of thanks to all the dignitaries, charities and the volunteers that attended the event.

Chairman CWFP UK, Mr Zaheer Ahmed in his concluding address said that he was delighted to attend this evening event, along with his vice chair and came all the way from London just to offer his wholehearted gratitude to charities and AMEA volunteers to say a big “Thank You”. He was impressed with the way the event has been organised and the charity money raised during the charity walks and the immense work done with the RBL colleagues at the local level. The hard work is clearly being demonstrated with the positive
relationships that AMEA has built with the local charities and RBL.

At the conclusion of a unique and memorable evening the chairman requested Mr Slah Uddin Mir, the Regional Missionary to lead the congregation in silent prayers. The event finished with a delicious asian sit down meal for everyone.