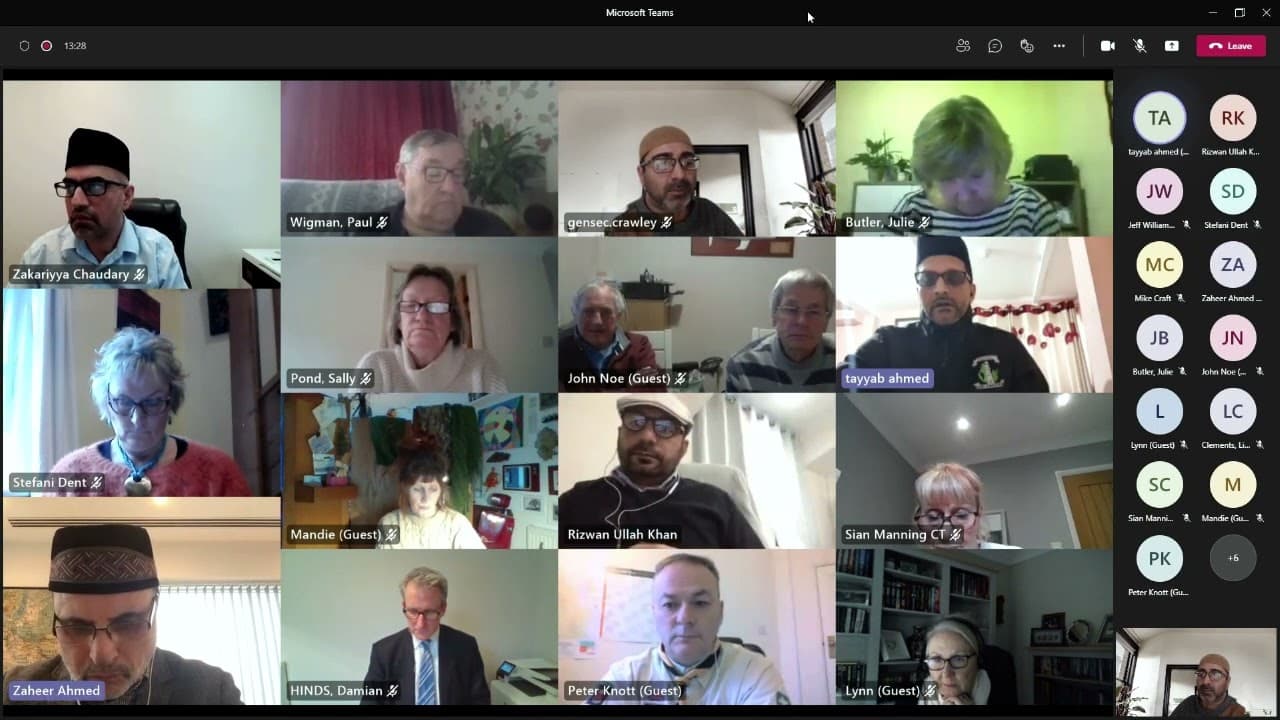 Muqami Region Organised its Virtual Charity Cheque distribution ceremony for the funds raised in its regional walk back in September 2021 in Association with EastHants District Council.

Since 2017, this cheque distribution ceremony is considered to be the conclusion of yearlong efforts and hard work of CWFP regional and national team.  This year due to pandemic council and regional team decided to keep this event virtual. More than 30 people attended the ceremony including representatives of benefitting charities, Councillors from East Hampshire District Council, Deputy Leader of the Council Cllr Julie Butler and Rt. Hon Damian Hinds MP for East Hants District.

After recitation and translation of Holy Quran Mr Zakariyya Choudhry Regional Nazim e Ala briefly informed all in attendance about the history of Charity Walk for Peace and its contributions toward the common good locally and nationally. Cllr Julie Butler Deputy Leader EHDC highlighted the achievements of regional walk since its start and announced the date for next year’s walk, which is decided to happen on 21st May 2022 in Hogmoor Inclosure “a beautiful and scenic park situated in beautiful town of Bordon just a few miles from Hadiqa tul Mahdi”.

Rt. Hon Damian Hinds addressing the ceremony thanked Ahmaiyya Muslims Elders Association, Ahmadiyya Muslim Association and Charity Walk for Peace for their phenomenal work towards building a cohesive society and helping the less privileged members of the society. He also expressed his delight for being a part of this cooperation between EHDC and CWFP since its start.

All participating charities also had the opportunity to introduce their organisations and inform everyone how they plan to spend the funds they received in the ceremony.

Mr Zaheer Jatoi Chairman National Charity Walk for Peace concluded proceedings of the ceremony by a short speech and silent prayer. In his speech, he said: “It was a great effort by the teams at EHDC and CWFP to get the walk going again this year and we are delighted to be able to bring some benefit to the local community.

“CWFP” is committed to supporting the local area in any way it can and raising money through the Charity Walk for Peace continues to be a successful way to do that.”

The seven charities to receive funding from the event 1100 each this year were: