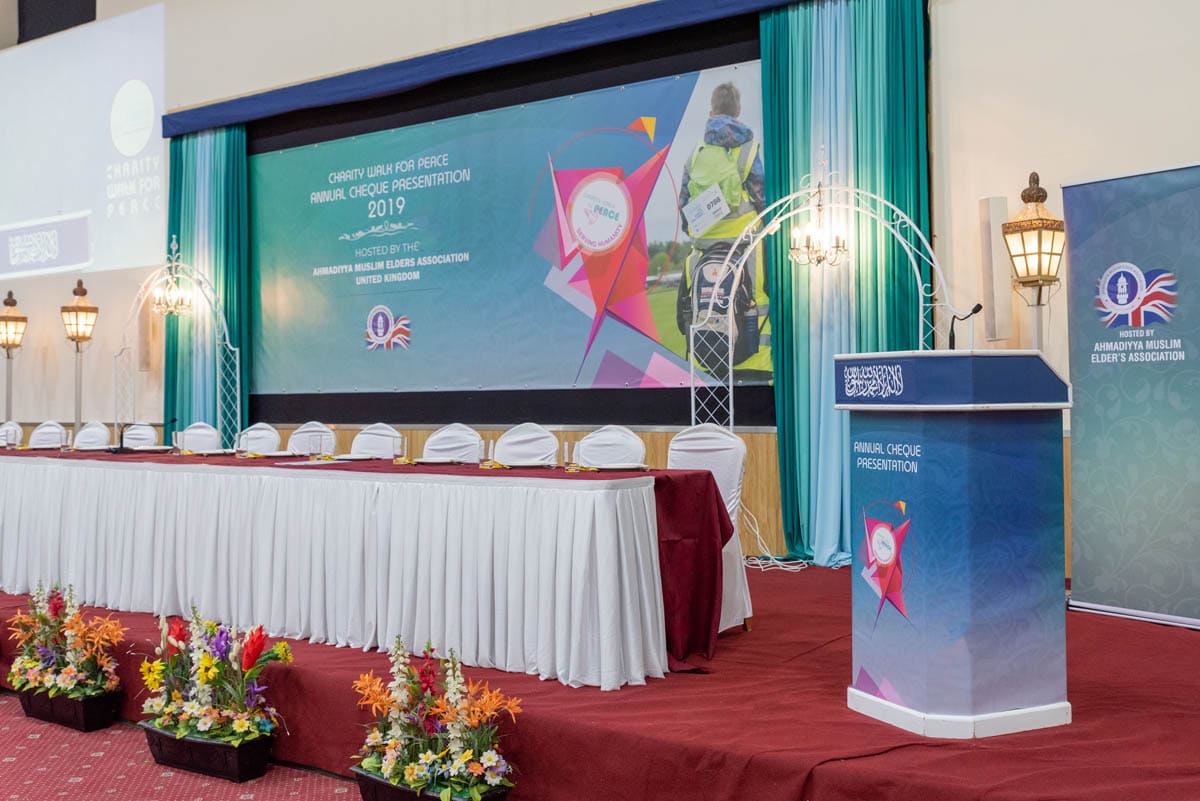 Charity Walk for Peace, an initiative of the Ahmadiyya Muslim Elders Association UK, has been at the forefront of supporting numerous UK registered charities and not-for-profit organisations. Since 1985, over 6 million pounds has been raised for various causes through the walk. This year the national charity walk took place at Milton Keynes, Buckinghamshire.

Prior to the formal session, various charity champions were awarded for their fund-raising efforts. Our guests were provided tours were provided of the Baitul Futuh mosque and its complex.

The formal session of the event began with the recitation of the Holy Quran. The welcome address was delivered by Dr. Ch. Ijaz Rr Rehman, the National President of the Ahmadiyya Muslim Elders Association UK. In his addresses he said:

“I am very grateful to all the volunteers, whether they belong to the Ahmadiyya Muslim Elders Association or the charities who are being represented here today, for given up their time and work for the benefit of mankind.”

“I take this opportunity to thank all the volunteers, donors and charities whose tireless efforts this year again have borne fruit, fulfilling the collective aim of serving humanity and helping the less fortunate.”

Over 500 guests attended the event including representatives of over 150 UK registered charities, members of parliament and various other dignitaries. Guest speakers addressed the audience offering words of support and appreciation of the fundraising efforts of the Ahmadiyya Muslim Community.

“I would say thank you to all the people who actually helped come along, marshal and helped raise money for the event, they are our unsung heroes. And remember every penny that is raised goes straight to the charities, which I think has to be applauded and has to be spoken of every time we talk about what we trying to achieve here.”

David Elford OBE, Naval Regional Commander of Eastern England, congratulated the efforts of the community in his speech by saying:

“I would congratulate the Ahmadiyya Muslim community for everything you do, particularly in your amazing charity work and sums of money that you raised is humbling and staggering.”

“I know from my own Ahmadi community, how much good work they do locally. They don’t seek publicity; they just get on and do the fantastic charitable work and give generously.”

Clive Sanders, Fundraising Director at Save the Children, spoke about the help brought by the can-collections of the Ahmadiyya Muslim Elders Association this year:

“The money you’ve raised make an incredible difference to children around the world for which we are incredibly grateful. The collection that took place rapidly, the incredible mobilization and support and the volunteers raised enough in a single day to afford 6 thousand vaccines for pneumonia, which is the largest killer of children under the age of five.”

“The partnership between the Charity Walk for Peace and the Royal British Legion can only be a good thing. Remembrance is for everyone and we thank you and your volunteers for all of their hard work during the 2019 Poppy Appeal.”

Janice Howard, Mayor of Merton also spoke of the community’s generosity and hardworking towards fundraising by saying:

“I know from my own experience here in Merton, that I am always so impressed by your generosity and your annual walk for peace which raises so much money. Your focus on peace, compassion and sympathy is to be applauded, this unites us and it transcends race, nationality, ethnicity and religion. May your ‘love for all and hatred for none’ slogan continue to build bridges with the wider community for peace.”

Following the guest speakers, cheques were presented to various charities such as Royal British Legion, Save the Children, OCD Action, The Royal Society for Blind Children and many others. In total over 1.3 million pounds were raised to the walk and donated at the event.

The concluding address was delivered by the National President of the Ahmadiyya Muslim Association UK Mr. Rafiq Ahmad Hayat. In his address Mr. Hayat briefed the guests with the efforts of the community towards humanitarian causes throughout the world:

“These funds that are raised are really for UK based charities, but just to let you know that the community itself is doing a huge amount of work in different third world countries where our charities are working. For instance, Humanity First is one of the charities that the community is associated with and that charity’s principle objective is to provide disaster relief.”

This year Charity Walk for Peace raised an amazing £1,035,000. The event concluded with a sit-down meal for over 400 guests.