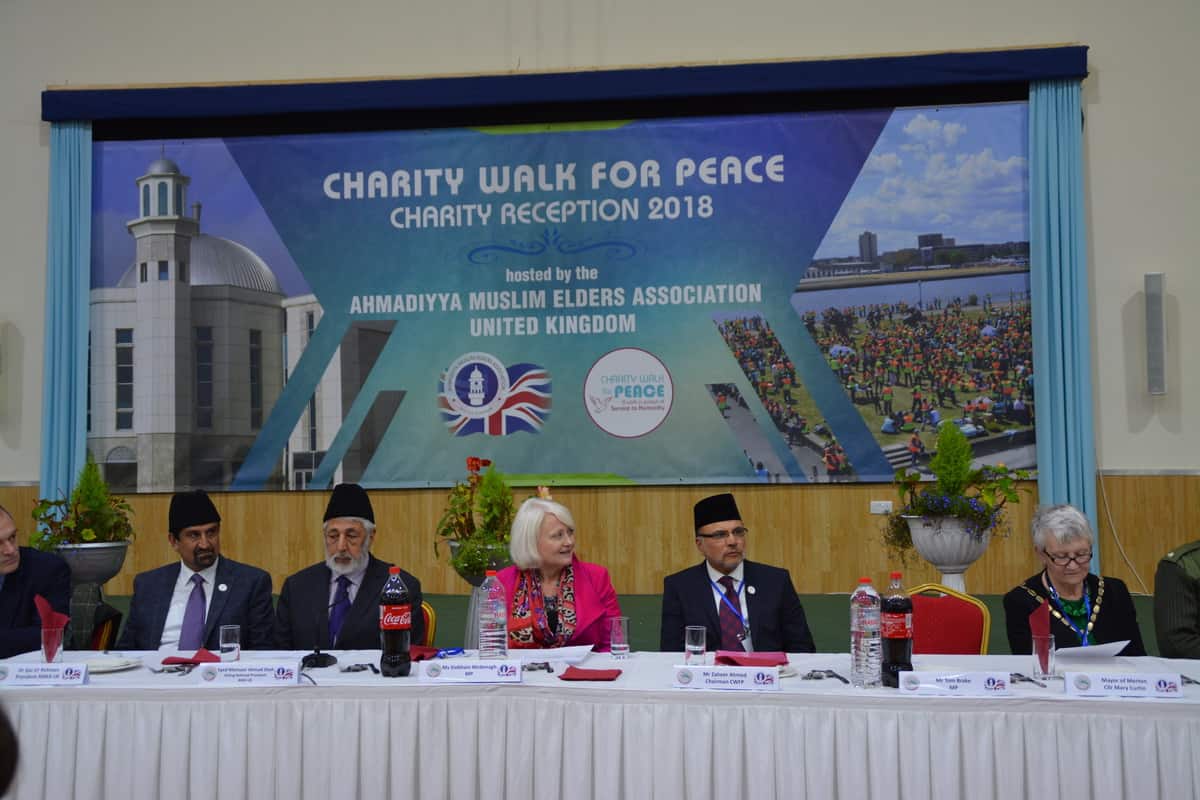 £1 million pounds has been raised and hundreds of thousands of pounds were donated to UK Charities by the Charity Walk for Peace at Britain’s Largest Mosque on Friday December 7th, 2018.

Over 550 distinguished guests, alongside a host of MP’s, Mayors and Councillors attended the prestigious Charity Cheque Presentation Ceremony held in the Main Hall at the Baitul Futuh Complex, Morden, where cheques for a variety of amounts were presented to over 150 charities from across the UK.

The Ahmadiyya Muslim Elders Association UK [AMEA UK] sponsored and co-hosted the ceremony to a packed main hall following on from an incredibly successful Charity Walk for Peace held earlier this year in the Royal Borough of Runnymede within the grounds of Windsor Great Park.

One of the highlights of the ceremony was the recognition awards presented to ‘Charity Champions’ from the Ahmadiyya Muslim Elders Association UK, who have over the course of one year worked tirelessly to help raise the £1 million pounds for so many different charitable causes that span the breadth of the United Kingdom.

A number of eminent guest speakers took to the podium and spoke on the work of the Charity Walk for Peace and AMEA UK and their own respective charities that were being supported.

The Chairman of the Charity Walk for Peace, Mr. Zaheer Ahmed, said:

“2018 has been an incredible period of time for the Charity Walk for Peace. We have raised an incredible amount of money and the hard work and effort from the members of AMEA UK and the Charity Walk for Peace is a testament to their loyalty for their country, to their fundraising efforts and to their overall genuine and humbling commitment to serving humanity and helping make a difference to the lives of so many.”

One of the largest donations made was to the Royal British Legion, for the incredible amount of £501,978, presented to Guy Upward, the Assistant Director for Fundraising. This donation follows the ground-breaking efforts from the members of AMEA UK who spent three weeks manning poppy stalls around the UK and across most train and tube stations in London.

“I am extremely humbled to be in a position where the efforts of so many hundreds of volunteers from our association have culminated in reaching a milestone in our fundraising, resulting in £1 million pounds raised, beating all our previous records. It is the Grace and Blessings of God that He has enabled us to be in the situation we find ourselves in today and I cannot thank the members enough for their efforts. I am extremely grateful to all the charities that have not only joined us today but those who supported this year’s Charity Walk for Peace held in Runnymede. It has been a historic year on so many levels.”